It's hard to see the fundamental case for gold vs. the U. S. dollar (USD) as other than strong when a flawed currency, the New Zealand dollar (NZD), has just now broken to an all-time high against the USD. Why is the NZD a flawed currency?
Because the policy interest rate is 2.5% while the latest inflation rate is 4.5%. The Prime Minister of NZ is a former Merrill Lynch banker. These guys do like printing money, that's clear. So if a country that is rebuilding after the Christchurch earthquake is doing it with cheap money, then gold should be appreciating against the NZD, all things being equal. (Please note that the NZD was one of the three currencies I highlighted last summer when I made the case for the following weak dollar plays: gold, silver, and foreign currencies. The other two courrencies I listed were those of Brazil and Norway.)
Except for countries near default, such as Greece, and with some exceptions such as Brazil and Chile, most of the world continues to operate with negative real interest rates. Sweden, for example, has a 3.3% inflation rate but only a 1.75% policy rate. All this is gold-bullish. Just last week, gold hit all-time highs in euro and British pound terms.
Is gold "too high"? Maybe, but given how depressed gold miners are, my sense is that a bull market as long and strong as gold's has been will generally end with public participation in the usual manner, namely in stocks. Instead of gold, the public has been indulging its dreams of easy money via momentum stocks of various flavors. I continue to look for $2000/ounce gold next year based on the "Elfenbein correlation" between percentage appreciation of gold and the positivity or negativity of "real" short term interest rates.
Understanding that there is a significant potential for summer weakness in all resource stocks, I also think that on a 6-12 month horizon, certain gold stock vehicles look better than bullion to me.
The big fly in the ointment, however, is the Economic Cycle Research Institute's adamant call for an important top in the global industrial economy soon. Primarily because of this, I am avoiding resource stocks except those related to gold (which has few industrial uses) and resource currencies.
As a consequence of a global industrial recession, at some point I would see capital being diverted to bonds. In that vein, I would note that the long-term downtrend line in U. S. interest rates survived the inflation scare of this winter. The chart of the same bond in New Zealand is similar at least for the past decade. (Click on chart to 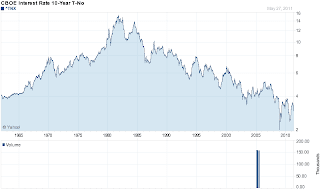 On a trading basis, I am therefore long various U. S. Treasury debt instruments. I thus have a barbell strategy: gold as my core holding to hedge against more money-printing to make the impaired balance sheets of the TBTFs whole, and Treasuries as speculative vehicles expecting that potentially sharp downtrends in the prices of industrial commodities in association with a global industrial recession (or fears thereof) will leave capital searching for the least bad alternatives.
I also own some defensive stocks and certain specialty financials.
I intend to discuss some ins and outs of Treasury investing (speculating, really, given that I don't expect the debts to ever be repaid in other than greatly devalued dollars) in the future. In the meantime, you may wish to review a November 2010 post on the topic in which I suggested that we could then have been within months of a major top in long term rates if we were not there already (which we most assuredly were not, as it turned out).

I read lots of gold-oriented blog sites, articles on gold, etc. I don't know if I am unique, but I think it's rare to be a bull on gold and a tactical bull on intermediate to long-term Treasuries at the same time. Let's see how the months ahead go. It looks interesting, to say the least.
Copyright (C) Long Lake LLC 2011
Posted by "DoctoRx" at 11:23 PM