Too Much Bubble Babble; Focus on Treasuries and Gold

Might there be a bubble in talk about the same?

This weekend, Randall Forsyth filled in for Alan Abelson with the lead article in this week's Barron's, titled Vacuous Bond-Bubble Talk. He begins as follows:

THERE'S A REAL BUBBLE TAKING PLACE in the markets and you can scarcely miss it, so blatant and omnipresent has it become. It is, of course, the bubble in talk about a bond bubble.

Maybe not. CNN Money and Fortune have the following article running, 5 Investing Bubbles, which asserts:

Michael Pento is out with an article titled The Fed's Biggest Bubble. He states that:

While Wall Street and Washington are petrified of the deflation boogieman, the real menace lurking in the shadows is the Fed's bond bubble . . .

A decade or more ago, you heard little or now talk of bubbles. It was understand in general terms that bubbles were rare and undefined. Just as with Justice Stewart's definition of pornography, you knew one when you saw it. So, when gold spiked to over $800/ounce in January 1980, then trended down for two decades, it looked like a bubble at the time and acted in the long term as if it had been one. Similarly concepts apply to U. S. stocks in 1929. Now that NASDAQ stocks went into a bubble phase in 1999-2000, and housing more recently, a search for bubbles appears de rigeur.

As with all investment memes and media themes, it's helpful to avoid undefined labels such as "bubble" and look at the facts. In investments, there are both fundamental and technical factors. Most people think they understand what a fundamental of a security or commodity is, at least in concept. A technical factor attempts to look at supply-demand forces to help guide one's thinking about where the price of the asset in question may move to. One important characteristic of technical analysis is whether an asset is moving from strong to weak hands or vice versa.

In this write-up, I am going to discuss fundamental and technical factors relating to the topics described above, namely Treasury securities and gold.

It is of concern that a media that has not been advising the public to jump into the wonderful asset class of Treasury bonds for the last 30 years is pushing it hard now that yields are at historically low to unprecedentedly low levels.

Here is another quote from CNN/Fortune piece as to the author's reasons why Treasuries are not in a bubble:

The national debt is still a manageable 40% of GDP. Economists warn that growth will slow when it reaches 90% of GDP. The Congressional Budget Office projects it will take nine years to get to that level, and that's if Washington, which is debating the deficit, does nothing.

Let's do a fact check. Here's what OMB has to say. In Table S-14 (page 55) of its mid-year report to Congress, total gross Federal debt for the fiscal year that is drawing to a close was estimated as $13.779 trillion. For upcoming FY 2011, they are projecting $15.265 T. Sorry, CNN/Fortune, your numbers are incorrect. These numbers are excluding the ongoing and massive Fannie/Freddie bailouts, prospective FDIC and FHA (Ginnie Mae) losses, guarantees pursuant to emergency measures adopted in 20089, and implied but unfunded Medicare obligations. Debt has reached 90% of GDP under the most conservative assumptions and guess what, growth has slowed. And so far as Washington may do something about the deficit, it naturally is debating continuing some or even all of the 2001 and 2003 tax cuts that are due to expire at the end of this year, and the expiration of which is assumed by OMB's analysis of the projected (very large) deficit for FY 2011.

Beyond the above facts, there is common sense. Which would you rather own, an FDIC-insured bank deposit available on demand yielding 1.30-1.50% with the bank arm of profitable, highly-rated credit card issuers that advertise these deals all over the Net, or relatively illiquid 2-year Treasury notes yielding 1/2 of one per cent per year? (They are in practice relatively illiquid because of the bid-asked spread retail has to pay.) 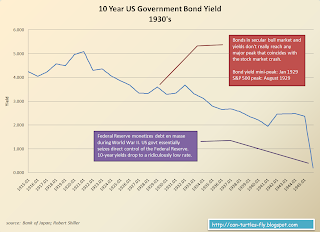 That period involved obvious massive decline in prices across the board, and the U. S. was almost debt-free with massive gold reserves. A financially much weaker federal government, with banks that were/are arguably insolvent in the good times of 2007 (as revealed by securities pricing that became known in 2008), now is selling debt at higher prices (lower yields) than it did during the Great Depression!

This may or may not be a bubble, but is this fair value?

In another way of looking at things, my quick analysis is that in the 20th century, every time that Treasury bond yields have gone well under 3%, stocks have provided much better returns in the 10 years following.

One of the characteristics of bubbles in a see-it-you-know-it mode is media cheerleading.

Well, the L. A. Times is out with the bond equivalent of Internet hype a decade later. It is throwing out for all to laugh at the idea that there is a shortage of federal debt, in its article titled As economy fears deepen, everybody wants what the Treasury sells . It begins:

Good thing Uncle Sam is floating another $102 billion of debt this week. From the looks of the Treasury market on Tuesday, there aren’t enough government securities to go around.

Yes, John and Jane Q. are camping out the night before those hot Treasuries go on sale to get their share of the national debt, aren't they? What? They aren't?

No, they aren't. Here's the proof, from the same LAT article:

In this environment, whatever debt Uncle Sam has to sell, there are plenty of buyers -- including the Federal Reserve . . .

Austrian economists however teach to be wary of central banks buying Treasury debt. These anti-central bank libertarians have led the charge against the evils of central bank debt monetization. The central bank wouldn't buy the debt directly unless the free market would not (at current interest rates).

Maybe the public can still be misled by "Keynesians" run wild (though I am not sure whether in his later years even Keynes was as "Keynesian" as Ben Bernanke) is something I can't answer, but I smell the same rat I smelled in 1999-2000, when the media made sure the great unwashed were the repository of the greatest distribution of junk stocks in American history, pushing Yahoo! at 100X sales and Cisco at 150X earnings.

Now, 150X earnings is actually less undervalued in theory than 2-year federal debt at 200X earnings (the reciprocal of 0.5% interest).

On a chart basis, the 10-year note's yield has collapsed from 4% to 2.5% since April 5 of this year. This yield is lower than the note's 200 day moving average hit at any point at least as far back as my continuous chart goes back (to 1962), even including the period in 2008-9 post Lehman/AIG when the financial world had its equivalent of a stroke or heart attack.

So on a variety of fundamental, media and technical standpoints, my view is that short-term and intermediate Treasury issues have at the very least dropped too far, too fast to be attractive to me at this time.

Gold has no fundamentals per se, so here are some of the ways I look at it.

First, the cost of prospecting for gold, developing a permitted mine, getting gold out of the mine in refined form, etc., is substantial. In the colloquial, it is not a gold mine of a business. And this is not 1979-80. Investors are not throwing scads of money at start-up gold ventures. So from that standpoint, gold is not in a bubble.

Another fundamental about gold is whether it has returned "too much" to its owners relative to competing monetary choices.

I went to a site that lists historical gold prices (http://goldinfo.net/yearly.html), which is a commercial site that I have no business relationship with, and found gold prices from various years. I then used a standard calculator to determine compound annual rates of return (CAGR) from then to now, using $1230/ounce for today's gold price. This is what I came up with.

Highlighting the 100-year return, Norfolk Southern just sold a 100-year bond at 5.95% return per year. Given that NS is not a AAA-rated company, does a 4.17% 100 year return on gold seem as though its price is in a bubble in comparison?

Re the 1977 comparison, economic statistics from WikiAnswers from 1977 include:

Separately, I have looked at 10-year Treasury note rates from 1977. It appears that they averaged about 7.4%. That would imply that had there been a 30-year Treasury bond out then, it would have yielded about 8%. And the Dow Industrials are up 12X since then, which even without dividends included beats gold's return.

What has been presented above indicates to me that gold, which after all is intended to be a permanent, indestructible store of wealth, shows no bubble valuation characteristics in comparison to many other financial alternatives.

Its verdict on gold, as mentioned at the beginning of this article: "major bubble".

My view is, unsurprisingly, different. That the mainstream media would tar gold, which has been a mediocre investment over long periods of time, as being more bubbly than a Communist country's stock market says to me that gold has yet to become truly mainstream and thus it would be hard to be in a bubble (though it could simply be overpriced). And I identify the zero to negative real interest rate policy of the Federal Reserve since the events of 9/11/2001, the associated recession, and then the creation of and bursting of the resultant debt bubble as the core reason why gold has gone up reasonably steadily for 9 years.

In other words, so long as the Fed keeps printing money and monetizing the debt, the MSM sneers at gold while propounding misinformation about the quantity of federal debt, and gold's chart shows no clear signs of distribution from strong (well-informed) to weak (poorly-informed) hands, I am confident that gold is not in a bubble.

I suspect that gold remains a good investment apart from a bubble-no bubble discussion, but that's a topic to be discussed in the near future in more detail.