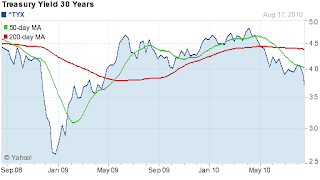 The long Treasury bond has defied the obvious tendency that when a lot more of something is produced, the price tends to drop. Instead, there has been a buying surge in Treasuries. Thus, based on such reasons as weakening forward-looking economic statistics, general disdain for the way in which the economy has been run (including disapproval that it is being "run" at all rather than functioning freely), and the technical picture just a few weeks ago, I turned tactically bullish on bond prices just a few weeks ago, as discussed in various blog posts.

The Treasury markets have moved massively in a very short time, with relatively little fundamental support for such a large repricing. The 10-year (not shown here) has collapsed from high to low in 4 1/2 months over 35% in yield (4.0% to below 2.6% briefly). The 30-year (click on image to enlarge) shown here has moved less, and I favor it over the 10-year as the yield spread between the 10 and the 30 hit over 120 basis points and compressed today to a very wide level of 110 bps.

Nonetheless, the absolute yield level of the 30 year bond at about 3.7% is at or below the lowest level its 200 day smooth moving average hit during the entire 2008-9 stock bear market and amazing Treasury bull market. Thus I'm thinking there's some combination of fundamental and technical overvaluation here in both the 10 and 30 year bonds, with greater risk in the former (and less reward).

Who knows, but it's looking more and more to me that a base case is for the 10-year to correct upward in yield even if the longer-term picture is for a 2% yield and a 30-year yielding in the 2.5-3.5% range. Thus the long bond, which day-to-day tends to trade directionally with the 10-year, is in my view a difficult hold from a trading perspective, and I have taken some nice profits for a 1-2 week trade. A completely unscientific rule of thumb I have developed is that if I can "make" one year's worth of interest income from a quick bond trade, I strongly consider taking it. If I get two year's worth of interest income, I grab it.

Thus I've reversed most of my bond purchases put on in the last few weeks.

Meanwhile, one of the many correlations I have found useful in the post-Great/Global Financial Crisis world is that MCD (McDonald's; Mickey D) has for over a year traded in line with the 10-year. MCD recently joined gold in making a new all-time high in 2010; I believe MCD is the only Dow 30 Industrial to do so. And this is MCD's 2nd surge this year to a new high, if memory serves me well. Meanwhile, with the amazing fall in the 10-year yield to well under 2.70, MCD yields 3.00% now and thus can easily appreciate 10% in price and still be fairly valued under this relationship.

In addition, should the rest of this year not have a re-run of 2008 or worse, MCD's board will increase its dividend late this year for 2011. My guess is about a 9% increase. Thus I reason that if the 10-year yield is at 3.0% sometime next year, MCD stock could easily trade at that same 3.% dividend yield it now enjoys and thus stockholders could see a price increase of about 9% to keep the new (projected) yield at 3.0%, plus the current yield of 3.0%, and thus get a total return of 12%.

If over the next 10 years MCD's dividend rises at a compound annual rate of 7%, it will have a terminal dividend yield of 6%. Thus for every $100 invested in the stock at today's price, about $45 would come back to shareholders; this is vs. about $26 back to buyers of the 10-year bond at this week's price/yield. All other things being equal, MCD's stock price could thus drop 19% (45-26) ten years from now and be about an equally good investment as the 10 year bond.

This August 18, with so much of the public convinced that the "Great Recession" never ended and thus pinching pennies, and with MCD's sales and profits growing in the U. S. and abroad at a pretty good clip, a good part of my personal trading money has abruptly shifted to MCD on the early breakout to new highs and sold the extended Treasury move. If MCD stock price falls without a change in the fundamentals and without a massive breakdown in Treasury prices, I plan to buy more.