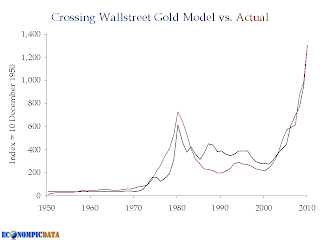 Eddy Elfenbein of CrossingWallStreet.com had an interesting post up yesterday on a theme I have blogged about a number of times before, namely that gold tends to rise when Fed policy is easy and tends to sink when it is restrictive. His point is that high rates of price increases are not needed to send gold upward. He estimated that a neutral price for gold came when 3-month T-bills were 2 points above the inflation rate (?CPI). That nicely explains 40 years of gold pricing, per the accompanying chart (click on chart to enlarge; a similar chart of shorter duration is found on the link to his post).
Gold is up about 30% year on year. That has made many people nervous, per the WSJ today, which ran Surge Worries Some Gold Bugs: ‘Starting to Look a Little Scary’:

In recent days, old yeller has made a mockery of our anti-gold stance here at MarketBeat by surging ever higher.

It’s gotten to the point that even some of the most die-hard devotees of the yellow metal seem to be getting a bit jittery.
It then quotes some bulls who think gold moved too far, too fast.
But that's what happens in bull markets. Surprises and overshoots occur on the upside.
Think back to the implosion of Ambac (ABK) that began over three years ago. There were any number of oversold conditions followed by rallies. Yet the stock was down 90%, then from there down another 90%; and it's down more from the 99% down level. There is nothing scary about a strong bull market unless you're short.
When might gold enter a bubble phase? Per Louise Yamada, speaking three days ago on Bloomberg TV, this would occur if gold hit $5000/ounce within the next few years.
The closest thing to a bubble, in my humble opinion, is the rush to lose purchasing power by seeking the "safety" of Treasury bills when prices are rising much more than the bills yield. It's death by a thousand cuts rather than buying the NASDAQ at 5000, fated to lose the great majority of its purchasing power with no dividend income offset in a couple of years. It is the overvaluation of T-bills that, per the Elfenbein quantification, has provided investors who despite using no leverage have achieved outsized returns from gold ever since Alan Greenspan put the monetary pedal to the metal shortly after the 9/11 attacks and then again when Ben Bernanke blinked in the face of the Great Financial Crisis.
The price action in silver suggests that the last sort-of-resistance level is the $24-25 level that was reached in September 1980, months after the Hunt brothers fiasco exploded early in 1980.
It would not be unusual to see a substantial further sell-off in silver following today's 3% sell-off, likely with gold moving with silver but less so on a percentage basis. The structure of this last rally in silver, from a strong base, is similar to that of gold a year ago.
No matter whether the Fed prints more money, the case for precious metals remains intact. The Fed will do whatever it can to keep the T-bill rate below the rate of price increases for as long as it can. Assuming reported inflation stays low, the Elfenbein model suggests that precious metals will continue a meaningful upward trend that leaves people thinking it's a bubble because the high reported inflation of the 1970s is not present stuck in the alleged inflation hedge of stocks; or in cash or short-t0-intermediate term bonds.
A corollary to the above points is that this thinking provides a coherent explanation how it is possible to be bullish on long Treasuries and on gold at the same time.
Copyright (C) Long Lake LLC 2010
Posted by "DoctoRx" at 8:01 PM