Warren Tries to Mislead You: Here's the Scoop

Ben Stein reports in Fortune about an interview he did with some people favorite uncle figure, Warren Buffett. Mr. Stein, valedictorian of his Yale Law School class and the son of the eminent economist Herbert Stein, strikes me as an unlikely person to be awed by Uncle Warren, but his article begins as follows:

The first thing I notice on my most recent visit with Warren E. Buffett, who recently turned 80, is how incredible he looks. He would look terrific for 50; for 80, he looks like Charles Atlas. He's modest about it, as he is about everything. "It all works great," he says. "The eyes, the hearing -- everything works great ... which it will until it all falls apart."

The second thing you notice is that he is so smart it curls your hair.

Here's the whopper I caught. It's where he quotes WB as saying:

. . . "we needed a really big stimulus in the fall of 2008 -- a really, really big stimulus. We didn't get it. It was a miracle that Bank of America (BAC, Fortune 500) bought Merrill for $29 when it was probably worth 29 cents if left on its own for a few days. If that hadn't happened, everything would have collapsed. . .

Some miracle. The same emergency save of Merrill, which could have indeed been had for pennies on the dollar, was made by the same company that saved Countrywide, obviously another insolvent company.

Basically what everyone knows happened is that the larger failing institutions were parceled out to the giants. It was no miracle. It was the crisis plan in operation.

A smaller whopper in the above ties in to Mr. Buffett's partisanship. He conveniently forgets first that the Bush administration pushed through Congress a nearly $200 B stimulus program in the spring and summer of that year, and then that the up to $700 B TARP provision was passed as part of a yet larger bill:

Additional unrelated provisions added an estimated $150 billion to the cost of the package . . .

So the administration, with a Democratic Congress, put through unprecedented emergency peacetime spending in one calendar year.

Now let's address Mr. Buffett's variant of the common trope about gold that is in the same vein as Keynes' comment about how useless it was that people would go to great effort to bring gold out of the ground, refine it, and then transport it to a vault to simply let it sit there. Here is the Buffett comment:

"You could take all the gold that's ever been mined, and it would fill a cube 67 feet in each direction. For what that's worth at current gold prices, you could buy all -- not some -- all of the farmland in the United States. Plus, you could buy 10 Exxon Mobils, plus have $1 trillion of walking-around money. Or you could have a big cube of metal. Which would you take? Which is going to produce more value?"

Thus the takedown of gold is, from a man so smart Mr. Stein's hair style was altered by meeting him, vague.

I blogged on September 8 that gold, silver and certain foreign currencies were in my opinion useful hedges against dollar-debasing Federal Reserve policies. Since then, and after today's sharp down move, GLD is up about 5% and SLV is up over 15%. A fund that tracks the price of energy, USO, is also up about 5%. Mr. Buffett specifically named hard asset-related counterexamples. But they are in the same vein as gold. Farmland is tangible, and XOM deals in tangible assets.

In the view of billions of sentient people now alive and in the minds of probably most people who ever lived who were involved in a money-based economy, precious metals are money. Paper money was historically an anomaly.


Note the nearby chart of the NASDAQ index (click on it to enlarge). From its bottom near the 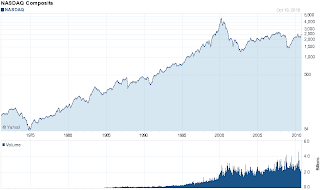 end of 1974 to its peak little more than 25 years later, it rose almost 100 times. Even now it is nearly 50 times higher than at its low. Yet you can't eat the NASDAQ stocks, but you can use its products. Almost no dividends have flowed to NASDAQ stockholders. Over all these years, even the vicious 1987 bear market is seen to be nothing more than a bump on the road.


The case for physical gold in a modern portfolio is stronger than the case for the NASDAQ. Simply doing cool tech stuff doesn't mean that anyone should own shares in the corporation doing said cool stuff. On the other hand, in a world where central banks all over the world are keeping the base cost of money deliberately below the rate of consumer price increases, gold represents an asset that cannot be zoned environmentally sensitive as farmland can (and cannot produce a bad crop yield year after year) and that remains the opposite of what the NASDAQ became many years after it had risen greatly: derided and unpopular. Other measures such as low levels of funds in the trader's Rydex SGI Precious metals mutual fund suggest that no matter that gold is talked about a lot, no buying mania amongst the populace has occurred.


Uncle Warren, in my view, is speaking for the Establishment. He is pretending that it was just a stroke of good luck that Merrill happened to get purchased over a weekend at a ridiculously inflated price and he is denigrating gold by comparing it to rather similar anti-inflation hedges.

Not only is gold rare, but the economically surging people in China, India and Brazil trust gold and silver over paper. Why fight the new kids on the block?