It's bad enough when they shrink the size of my non-butter substitute from 16 to 15 ounces. It's worse when my parents' sour cream index soars 50% or so in price in less than 8 months.

But when they shrink the width of a roll of toilet paper, they've gone too far. Talk about not playing fair!

As goes toilet paper, so goes the dollar.

To try to verify if I am being more than a bit too harsh before publishing this, I asked myself whether, if I lived in Hong Kong or Sweden, I would have any interest in gaining exposure to the U. S. dollar. The answer was so obvious that I spent no time debating the answer with myself.


I then asked myself a more difficult question. Are there any currencies that are poised to outperform gold from here, counting the interest from bank deposits or government bonds?

It's not an impossibility that fiat paper can beat gold for periods of time. The U. S. had over 20 years where government debt far outperformed gold.

Here is one candidate to watch. It is Sweden. Sweden is running government surpluses, and the government is said to actually be overstating its liabilities. It had a banking crisis about two decades ago, resolved it without coddling the crippled banks, devalued its way back to financial health, and in 2006 began a program of successive tax cuts. Its central bank is well on the way toward extending an already impressive series of post-Global Financial Crisis rate increases, its economy may currently be the strongest in the E. U., and it maintains its own currency separate from the euro.


Any time you see a socialist country repeatedly cut taxes and then see the economy start booming, I believe you see the potential for it to offer savers enough return on their capital after inflation to bring willing capital out of tangibles such as gold into the financial system.
Here is a 5-year chart of the USD vs. the Swedish kroner (SEK): 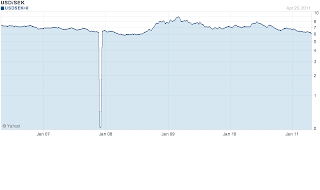 I don't know what's with the spike down at the end of 2007. I'm ignoring it. I don't think that Sweden declared bankruptcy and then suddenly said, "Never mind". It's clearly a chart error. Blame Yahoo.

In any case, the downward tilt on the chart reflects a weakening trend of the American dollar against the Swedish krona. You can investigate this pair on Yahoo Finance with the symbol USDSEK where a typical stock symbol is inputted. There happens to be a Rydex CurrencyShares security the purchase of which buys bank deposits in Sweden, so there is a yield to the investor that is currently somewhat over 1% after the 0.40% trust expense ratio. That yield appears set to rise as the Swedes tighten up after their own extreme easing cycle.

As the American standard of living continues to lag the promises of the State, other countries actually are doing what the U. S. sort of did 15 years ago, which is to either shrink the size of government or at least be honest about its size and bring in revenue equal to or greater than expenses. That sort of government offers an attractive alternative to U. S. Treasury debt right around now.

While gold remains the "gold standard" for diversification from the U. S. dollar in the opinion of many, many people, it may be wise to continue to also look for non-metallic alternatives such as higher-yielding debt instruments (and related bank deposits) of the best-run governments. I have added a significant amount of FXS to my holdings in Brazilian, Norwegian, and New Zealand currencies, and will be watching to see if it one day makes sense to go out farther than bank deposits in the Swedish bond market.