Too Much Complacency in the Stock Market

I picked up two vibes today during the midst of the stock market downtrend that made me add to my short positions and, with more firepower, add to my Treasury holdings.


Here we were past midday, down over 1.5% on the Dow and SPY, with clear global deceleration in economic activity, a highly valued stock market, and the major negative for the developed countries of continued $100/bbl oil, yet the VIX was only 17.5. For 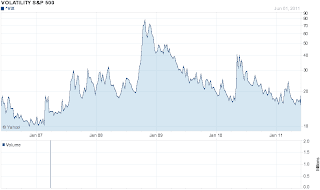 newbies, the VIX is a volatility index, and a low VIX reliably measures low fear of a stock market downturn via certain stock options trading computations. During the 2007-10 period, I observed that a VIX under 20 reflected too much optimism, and a VIX over 30 reflected too much pessimism. During good economic times, such as the 1995-99 period, the VIX can stay low for a very long time, but when the economy is not performing well, one does not see that pattern.

You may click on the nearby chart of the VIX for the past 5 years to enlarge it.


(Some people prefer a somewhat different measure of volatility, with the symbol VXO.)

It seems to me that the newsflow has turned rapidly enough to justify more anxiety than I was seeing, as would be signified at a minimum by a VIX of over 20 and preferably over 25.

The second sign I did not like was a series of comments on a well-known financial blog that appeals to those of the ursine point of view. Nonetheless, several of these comments were to the point that Gentle Ben was protecting their bullish stock positions. This comes from all the uninformed talk that the Fed now has a third mandate, after its Congressionally mandated goals of balancing low inflation with full employment, which third mandate (allegedly) is to keep the stock market up. Talk about LOL that these commenters had no idea what the Fed's true first mandate is. That mandate is to keep the Treasury funded. If Congress determines it is going to run trillion dollar annual deficits as far as the eye can see, and if the real economy cannot fund that amount at rates acceptable to Treasury, then it is up to the Fed and a more-or-less captive post-2008 banking system to accommodate enough money and credit creation to fund the deficit. So if the real economy is cyclically about to falter, and the Fed has to choose between high interest rates (as demanded by the free market given high monetary and price inflation) and letting the pols fund the deficit, IMHO it is nolo contendere. The Fed will have no choice. It and its cronies will drop their support of the stock market like a hot potato and herd the once-inflation phobic crowd into Treasuries. If necessary, they will do what it takes to scare people out of risk assets in order to support Treasuries. They will do whatever it takes. Treasuries uber alles. Catch my drift? I want to make one thing perfectly clear. Making sure the Federal deficit is funded is Job 1 at the Fed. All the other goals must be subordinated to the prime imperative.

Now, if Congress and the President engage in ineffective or wasteful deficit spending, the Fed can honestly deflect blame where it would belong, which is to the elected officials. All the Fed can do is certain banking functions, after all. It does not send people to war and does not set industrial or farm policy, the level of subsidies the poor and elderly receive, etc. Once the Fed has done its best to provide funds to the government if "requested", it has met its primary obligation in a Keynesian financial system.

What we see in the U. K., with already chronic 4% price inflation and pitiful o.5% policy rates, is what the bankers will do here if necessary. They will make savers pay any price they can extract to recapitalize the banks via negative real interest rates. They will use their power to create and maintain a seemingly illogical interest rate structure. This occurred in the U. S. throughout the 1940s and into the 1950s. Interest rates on the short end in the 1940s were around 1% despite average CPI increases of 7% annually for that decade. The long bond was capped well under 3%. Was this "fair"? Who can say, but that's the way it was. It wasn't till the early 1980s that savers caught a break.

Meanwhile, as I write this on Wednesday night, Asian markets are down a bit less than the U. S. stocks were, setting up for a rally attempt Thursday. A common pattern would be a rally Thursday, perhaps successful and perhaps "faded" at the close, and then traders would be all over the Friday jobs report.

On the other hand, short term contrarian sell signals aside, I have already begun seeing a number of hysterical headlines suggesting that the financial world is ending soon. LOL again. Remember that going into this week, stocks have been down 4 weeks in row. This week would make 5. Maybe BofA does eventually go down into Dodd-Frank-type receivership and the markets pull a 2008-style major meltdown, but that setup is not happening next week. The financial world is not ending quite that fast, the overly advertized Greek fiasco is not going to blow up the European financial system, and Barack Obama has many levers left to pull in his re-election effort (and these include economic psy-ops).

If we get a sharp break again in the markets sooner rather than later, and the VIX finally shoots up, and if all that happens to cause that is a weak jobs report and perhaps some scary news from some small insolvent European country with fewer people than live in the Los Angeles metropolitan area, my current plan is to cover all my shorts, perhaps book what would then be decent profits in Treasuries, and play stocks for a short-term rally. (Intermediate-term, however, I'm not bullish on stocks, but as always traders must be flexible.)

Right now we are seeing a textbook segue from a 2-year post-recession (depression) rally into at best a growth slowdown scare and at worst another cyclical economic downturn. Unlike the chaos that began in late August 2008, this time we appear at least to have some ground rules.

We are being cursed with interesting times.