Two bits of potpourri.  One is that you may have already seen that per ZH, the BBC confirms that the Swiss people indeed are more "revolutionary" than the Socialist countries (LINK): 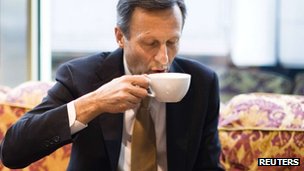 There was outrage in Switzerland over a $78m pay off, later scrapped, to the outgoing Novartis chairman.Swiss voters have overwhelmingly backed proposals to impose some of the world's strictest controls on executive pay, final referendum results show.

The other is that investors are getting more and more believing of the strength of the bull (LINK):

Short Sales Fall 53% With U.S. Bull Market Starting Fifth Year
Investors reduced bearish stock bets to the lowest level since at least 2007 as the bull market in American equities begins its fifth year.
Short sales in the Standard & Poor’s Composite 1,500 Index fell to 5.6 percent of shares available for trading in February, down from a record 12 percent during the credit crisis and the lowest ever in data compiled by Bespoke Investment Group and Bloomberg starting six years ago. Investor's Intelligence shows a dangerous chart:  the NYSE bullish percentage has risen from a fairly low level in the past 18 months, and has begun to roll over.  The rollover is the danger sign, not the high bullish level.

The belief is that the US economy is a supertanker, and that the Fed's ministrations are either harmless or not really necessary.  Yet at 7% of GDP, the Fed's money-printing effort likely continue to cover up for the Reinhart-Rogoff continuing depressed state of the economy.

Given all the money-printing, underlying good economic dynamics should show much faster nominal growth than has been measured.  It appears that there is no nominal GDP recession, but it's hard for me to see such a high P/E when there is such widespread underlying weakness.

The best solution for Japanese investors during their prolonger ZIRP period was to purchase shares of Japanese multinationals at fair prices, such as Honda (HMC) on dips.  This might be a good strategy at home, along with shares of truly stellar domestic companies on dips.

Meanwhile, the gold bugs are making a more effective case than befiore that sentiment is washed out.  That doesn't mean  a new money buy should be made, but let's watch for a trigger.  I am also watching for a test below the reaction low around $1522, which would force lots and lots of liquidation.  Gold has cycled from massively in favor in summer 2011 to moderately out of favor, and stocks have gone the other way.