More Strangeness out of California 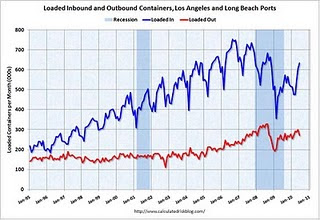 Calculated Risk has two sequential posts worthy of a little additional discussion. First posted was an update on L. A. Port Traffic, from which I have reposted the graph nearby.

Note how close imports were to exports at the left of the graph, which is January 1995. We are back near a bubble peak of imports exceeding exports. The difference is that our national financial condition is far worse now than then.

It was one thing when Japan, a defeated occupied nation, continued on for decades as a supplier of goods to its conqueror, the U. S., despite a series of economic recessions and even the semi-ultimate sacrifice of what appears to be an upcoming population shrinkage.

China, though, made whatever deal it made with the U. S. and the West when it moved toward totalitarian capitalism in the 1980s; but it was never defeated and occupied by NATO countries the way Japan was. It thus may well be more independent than Japan and may not accept IOUs in return for manufactured goods indefinitely.

It is hard for me to see other than that the trend toward a weakening dollar vs. trade surplus countries in Asia and elsewhere (Norway, perhaps) is likely a durable one. Meanwhile, the U. S.-based rating agencies insist that despite the enormous current Federal deficit, the parlous state of state finances, the large accumulated Federal deficit, the much larger promises to current and future retirees, and an electorate that is disappointed in its leaders, the U. S. is a triple-A credit.

Now, on to the other CR post, on a California housing tax credit. CR concludes the somewhat lengthy post thusly:

What on earth is California doing by giving up tax money?????