U. S. Involvement in the Afghanistan War Expands into Pakistan

Don't anyone look, but the Afghan War that NATO (i.e., the U. S.) is waging is spilling over into Pakistan with U. S. boots on the ground. From an editorial in the Nation online (a leading English language Pakistani newspaper) today:

America’s covert operation in Pakistan, through the ill-famed Blackwater and DynCorp surrogates and its own soldiers, is no secret from the world that is watching Washington’s game plan, the “war on terror”, unfolding in the region. The people of Pakistan, particularly of Islamabad and Lahore, have had the first-hand, bitter experience of their presence when they had to face the brutish behaviour of these armed men roaming around their towns. . .

It is time that Islamabad comprehended the fearful consequences of US intrusive policies that are threatening to weaken and destabilise the country. The unwise support we have been extending to its military and NATO forces in combating militancy has landed us in trouble. The US must listen to its own Congressmen and end its covert operation in Pakistan and read the writing on the wall in Afghanistan that is staring its armed forces in the face and beat a retreat. The will and doggedness of the Afghan resistance is putting the mightiest power on earth to shame!

So that's the Nation's editorial point of view. From its news reporting: 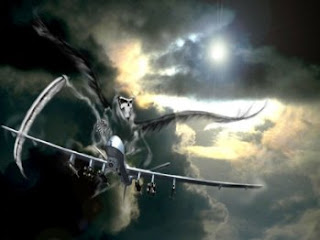 At least four people were killed and five others injured in a U.S. drone attack launched Sunday in South Waziristan. . .

The U.S. drone strikes are considered as a serious violation of Pakistan's territorial air space right and they are an important factor contributing to the anti-American sentiment prevailing across the country as most of the killed and injured in the drone attacks are reportedly innocent civilians.

The nearby picture is one the Nation generally shows when it reports on drone attacks.

Is the U. S. popular in Pakistan?

Pew looked into this recently, and found 68% percent of those polled in Pakistan viewed the U. S. unfavorably, as against 17% that gave a favorable rating. Pew also had this to say:

The U.S. also continues to face image challenges in predominantly Muslim nations. Roughly one year since Obama’s Cairo address, America’s image shows few signs of improving in the Muslim world, where opposition to key elements of U.S. foreign policy remains pervasive and many continue to perceive the U.S. as a potential military threat to their countries.

Meanwhile, while the expansion of the war from Viet Nam into Cambodia bestirred great protest, now the most we have is two powerless "maverick" Representatives (Ron Paul and Dennis Kucinich) protesting this expansion of the Afghan War into Pakistan, as has been widely reported, such as by AFP:

Two US lawmakers -- a Republican and a Democrat -- proposed a bill this week demanding the withdrawal of all US troops in Pakistan, where they are conducting covert operations against militants.

"We have known that US forces have been operating in secret inside the territories of Pakistan without congressional approval," Democratic Representative Dennis Kucinich said Friday, pointing to reports the United States was stepping up its presence there. . .

Kucinich said the covert operations were a "violation of the 1973 War Powers Resolution introduced after the Vietnam War that only allows the president to send US armed forces into military operations abroad if Congress approves the decision or if the United States is under a serious threat or attack."

"It is our constitutional responsibility as members of Congress to act," Kucinich added.

You can be certain that the House will ignore this line of argumentation. The war must go on, our leaders say (when they bother to talk to us about it).

As with the unending housing and other bailouts, Washington just perpetuates one mistake after another. There is no input from the public, no real debate, and no obvious point to policy after policy.

Of course Americans hope for the best, but given the ongoing depression in business activity and human costs, it is unclear why the wiser policy toward the region is not a more peaceful engagement that can over time win hearts and minds rather than hardening them.