On Gold and Silver Technicals and Fundamentals 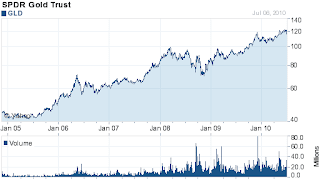 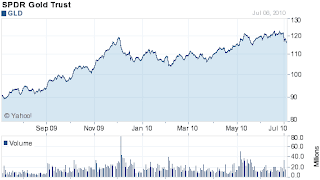 As the U. S. state and Federal finances continue to inspire little confidence, at least gold has no liabilities against it. It is the ultimate physical "money of the mind". Here are one-year and max charts for the ETF "GLD", which has tracked the price of gold closely to date (click on graphs to enlarge).
It is now 7 months since the early December peak in gold's price. Gold then corrected sharply but stayed over the $1000/ounce level that had been formidable resistance till fall 2010. Then new highs came, then the sell-off to under $1200.

Going back to the formation of GLD, every time it has made a new high and then 7 months later the price was below that of the prior high, one has had a good buy entry. The only adverse period would have gotten one in shortly before the fall 2008 panic. But if one is a long-term investor wishing to hedge against imprudent management of the currency by the authorities, than even sharp down-moves are, if brief, not all that meaningful.
Meanwhile, the fundamentals of gold as a percentage of money stock outstanding, all equity valuations, the debt levels outstanding, and many other parameters that I have seen all suggest that gold is at most fairly valued against competing asset classes or perhaps severely undervalued.
My belief is quite simple. When the monetary authorities are tight and reward cash, as in Paul Volcker's first term as Fed chairman, gold prices will trend down until it is truly "undervalued". However, ever since 9/11/01's events, the authorities have been "easy" in various degrees, only maxing interest rates to, but not above, inflation rates in 2006-7. We have seen that the bubble economy could no longer withstand even that balanced rate structure. Ever since then, inflation has been the desired order of the day, and gold has responded accordingly. To put it perhaps the more correct way, the dollar has responded accordingly, depreciating in price against the unchanging entity, gold.
Peter Brimelow wrote an article two days ago with some positive fundamental and technical news: Asia is buying, and bullish sentiment is moderate and moderating.
Given what may be exaggerated concerns about the short-term future of the U. S. economy and various overseas economies, it may be that silver has more upside price potential than gold; many observers including the heavyweight Jim Rogers prefer it on various chart and fundamental grounds. One can purchase shares in Silver Bullion Trust, run by the same folks who run the well-regarded Central Fund of Canada (CEF), at almost no premium to NAV, unlike CEF, which is over 40% silver (the rest gold) in its metals ownership. This fact suggests that indeed the speculative retail interest in silver is quite restrained now.
With money in the bank (pretend money, really) yielding almost nothing, the opportunity cost to hold metals is nominal. It's amazing to think that a security that returns a mere 2% after commissions two years from now beats a 2-year Treasury. If gold and silver merely track half of the true price inflation rate, will they beat "cash"?
Copyright (C) Long Lake LLC 2010
Posted by "DoctoRx" at 6:46 PM